GoalRef™ is a radio-based sensing system that uses low-frequency magnetic fields to detect if a goal has been scored.

FIFA’s Laws of the Game state that “a goal is scored when the whole of the ball passes over the goal line, between the goalposts and under the crossbar, provided that no infringement of the Laws of the Game has been committed previously by the team scoring the goal.” However, when it comes to deciding whether all of the ball was over all of the line, the naked eye can be inadequate. This is where GoalRef™ comes in.

The system uses low-frequency magnetic fields. One field is created in the goal area, the other is created in and around the ball whenever it approaches the goal. This is achieved through magnetic induction, which in turn is made possible by a passive electronic circuit embedded in the ball. The interaction between the main field around the goal and the field induced around the ball is picked up by coils attached to the goal. 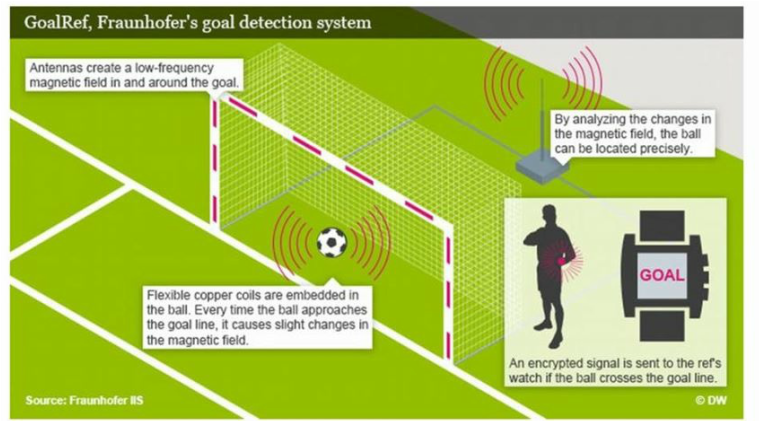 By measuring and analysing changes in the magnetic field around the goal, it is possible to determine whether the ball has completely crossed the line. The data is processed using software developed by Fraunhofer IIS, yielding a clear, accurate result that removes any doubt about whether a goal has been scored.

The result is wirelessly transmitted to the referee’s wristwatch, and a message is displayed in real time, coupled with a vibrating alert. The information is encrypted to prevent eavesdropping or tampering.